The staged ‘hearing’ of the three bloggers Abel, Befeqadu and Mahlet concluded with another appointment for 6th time.

The dramatic Sunday morning hearing was adjourned before it even started a the court registrar did not show up for the hearing but yet again set to continue as the registrar popped up out of nowhere. The judge decided to proceed with hearing that did not last for more than ten minutes and the hearing is adjourned for Monday 14th of July 2014 even though the police asked for more additional two weeks. The hearing started at least thirty minutes later than its scheduled time. 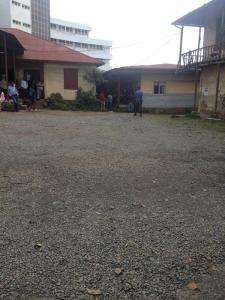 More than 300 hundred people have appeared to Arada First Instance Court to show solidarity with bloggers among which two individuals who tried to take a picture of the bloggers while they are being escorted to the court room are detained by the police. The fate of the detained individuals is not instantly clear. However eye witnesses detailed through their Twitter that individuals were harassed by the police. Attendees reported that the security was intense and the police forced them out from court ground.

Befeqadu Hailu reported to the court that he is made to make false confessions. He told the court anything which will come against him is not his confessions. The people who are forced to attend the hearing from a distance are frustrated and they compare the situation with an occupied militarily zone. The attendees waved their hands in greetings and give a message of support while the bloggers being escorted to the court room but police denied the crowd not to greet them by making the bloggers stay in the court room until crowd dispersed. 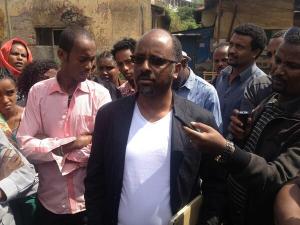 This is all we have for today for more details please follow the #freezone9bloggers hash tag with still lively thread of discussions.